On 18. December at Dom Omladine in Belgrade Nina will hold open poetry workshop in the afternoon and give her truly psychedelic performance in the evening. 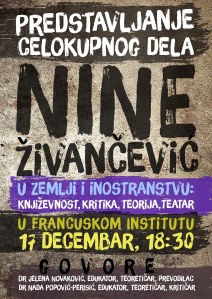 The French Institute and the Cultural center in Belgrade presents Nina Zivancevic’s entire missionary work in Serbia and abroad.

Nada Popovic-Perisic and Jelena Novakovic will talk about various aspects of her literary legacy as seen in literature, criticism, theory and in theatre.

at the University of Belgrade, theorist and translator.

Marc-Louis Questin, the Baroque hero of the performance scene in Paris